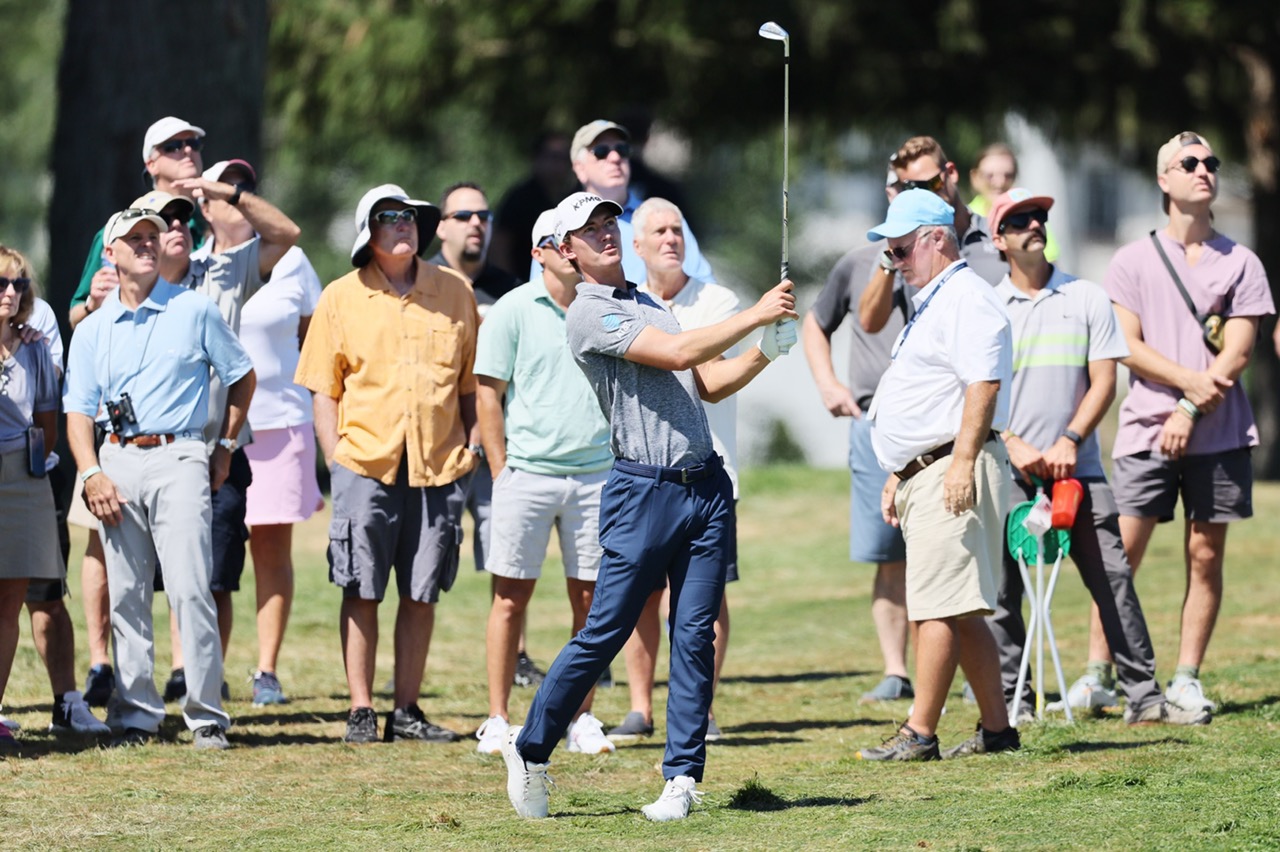 Hello everyone! Thank you for all of your support and for following me again this season.

The 2021-2022 FedEx Cup Season just wrapped up, and I finished a career-best 37th in the season-long points race. While I fell short of the ultimate goal of making the TOUR Championship, there were a lot of positives and I cannot wait to start back up again in Napa in a couple of weeks. Here’s a look at how I got there.

First event of the season. Came in fresh, excited, and full of confidence. Had one of the best driving performances of my life- I won the Strokes Gained Driving metric even losing two shots when we couldn’t find my golf ball in the rough just a few steps off the fairway on the 14th hole. Birdie-eagle finish on Sunday made me smile.

Highlight of this week was my hole-in-one in front of family and friends on the 8th hole Saturday. A soft 8i to a difficult back pin. Had a difficult Sunday, making Travis rake a ton of bunkers, but finished birdie-eagle to end this tournament as well!

Fun week partnered with Chuck Robbins, CEO of Cisco. Wasn’t my sharpest week, but playing Pebble -5 on the weekend moved me back into the better half of the leaderboard.

Hung inside the top 12 all week at one of the strongest fields of the year. I love these poa greens, and it was so crispy. I remember the rough being very challenging, despite being only about 1.5” tall. One 8i flew 135yds, another flew 205yds. Makes club selection difficult from the rough!! Also the scene of walking up the 18th hole and seeing the amphitheater on 18 filled with fans was one of the coolest moments of the year.

For some reason, a lot of weird things tend to happen at this tournament. Had a shaft snap as I was teeing up a golf ball, and really had difficulty greenside in the 4-6” rough. I know this is a golf course I can play well, it just hasn’t happened yet!

My first weekend at the players, though it felt more like a week. Weather delays gave me a full day and a half off mid-tournament, and the second round was the coldest weather I’ve ever experienced in a tournament. I was wearing leggings, pants, sweatpants, rain pants, and 5 layers up top. And needed every single one!

This was a real bummer of a week- I went 2-0-1 in match play (def. Joaquin Niemann 8&6, halved with Kevin Na, and def. Russel Henley 2&1). I led the tournament in strokes gained (if it were a stroke play event), but in the playoff tiebreaker with Kevin Na, he made a 20 footer for birdie to knock me out of the tournament. I had the best record of players who didn’t advance to the round of 16, so I finished 17th here. Not awful for last man in the field though!

I really had it going this week as well. I was t47 going into the weekend, up all night with food poisoning, only to shoot -5 on my opening nine and move into 7th place going into Sunday. My strength failed me on Sunday unfortunately, a liquid diet didn’t really do it for me. But I birdied 4 of my last 5 holes to sneak back to t35.

I love this golf course. T13 heading into Sunday, and just stalled a bit on Sunday. I was so excited and energized to be in the hunt, almost felt like I was chomping too much at the bit. Just didn’t quite get the putts to fall.

Partnered with roommate and best friend Joseph Bramlett again. We struggled in best ball, didn’t really ham-and-egg it enough to be successful in that format. I personally didn’t play very well, and am not a huge fan of TPC Louisiana for my game.

Really fun week, especially that Friday 65 to get me a Saturday afternoon tee time with Justin Thomas. Played well on Saturday but didn’t hit it particularly well on Sunday, and dropped back outside the top 30.

A fantastic putting round on Friday snuck me inside the cut line to play my first ever weekend at a major. Had a poor round on Saturday morning, and was lined up to be paired with Tiger on Sunday before he withdrew. Either way, 4 rounds at a Major was a positive.

One of my favorite golf courses, but not my favorite Friday performance. Made a few silly mistakes and missed a simple up and down on the final hole Friday to miss the cut by one shot.

Came in extremely energized after three weeks off… but poor timing as I caved in my driver in warmup before my first round. Threw my backup driver in with only time for one golf swing on the range. Didn’t feel comfortable and hit two drives OB in the first 4 holes. Played awesome golf after that, couldn’t get many putts to drop and missed the cut by a few.

Tied my career low with a Friday 63, and spent the weekend in the top 10 challenging that top position. Made some good progress with my golf swing with Butch, and it was so much fun having the lead within striking distance on Sunday.

Long trip over to Scotland, and wow did it not disappoint. Renaissance Club was awesome and got so firm on the weekend I was hitting 3i over 300 yards on some holes. I learned that links golf is about driving it well, controlling trajectory on iron shots, and lag putting. I can’t wait to go back. Oh, and I played pretty well in a strong field! Missed qualifying for the Open at St. Andrews by 2 shots.

Made the long trip to Tahoe to play an event at my favorite place in the world, Tahoe. I spent the entire week in the top 10 despite not feeling like I had my best stuff. Made a run on Sunday, and a terrible wind gust sent my ball in the water on 15 to end my chances. With the adrenaline gone, the fatigue of the past 4 weeks in a row caught up, and I fell back to t9.

Well… I decided to try to play 6 in a row with hopes of putting together a few good events to make my bids for the Tour Championship and Presidents Cup teams. Unfortunately the fatigue of the previous month manifested in a lack of sharpness until Sunday. I was vaulting up the leaderboard, then got one of the worst breaks of the year- my layup on 18 plugged in the side of the bunker and three full-swing hacks later, the ball finally came out of the bunker. A closing 9 erased all my good work that Sunday.

This was a bummer of a week, my body finally revolted and told me that I didn’t have the energy to compete. I shot a course-record 63 at nearby Western G&CC on Monday at an MGM corporate outing, but the rest of the week didn’t go my way.

After my first 4 days at home in 6.5 weeks, I was feeling refreshed and ready for the playoffs. T17 going into the weekend, and shot an extremely disappointing 75 to drop way back on Saturday. But I followed it up with an awesome 65 on Sunday to move up to 31st, and 32nd in the FedEx Cup.

My final event of the year left me at 37th in the FedEx Cup, which was 7 spots shy of making it to the TOUR Championship. All parts of my game showed signs of promise this week, and my Sunday 69 in firm conditions was the 4th best round of the day… but unfortunately didn’t get the job done.

I learned so much this season, particularly how to schedule and pace my events–68 of 72 days on the road to close out the year wasn’t exactly optimal for my performance! But this was still the best season of my career, and I’m going into the next season with even more drive and desire to win and make it to East Lake.

Thank you all again for your support! I hope you’ll follow me and support me again in Birdies 5!